Home : On the Verge 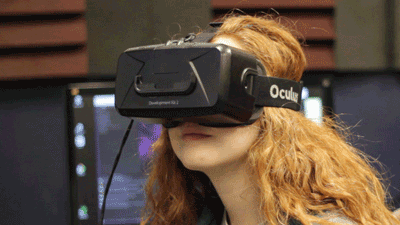 The Expressive Technology Studios, at the heart of campus, will transform student learning and spur interdisciplinary imagination and innovation. Learn more

CLA students, alumni and faculty are ushering in an age of virtual reality.

Novice monks in Myanmar "travel"
to ancient sites in Greece.

Kacey Hadick photographs the exterior of the church
as part of CyArk's data capture efforts.

Now that almost everyone has powerful computers in their pockets — complete with video players, GPS and motion- detecting software — virtual reality is more accessible than ever. You can simply purchase a headset, download a free app to your mobile phone, and be transported to Paris or outer space in no time.

For those new to the technology, here’s how it works: Goggles cover your eyes, presenting you with 3-D images of another environment; and motion-detecting software allows the image on your screen to respond as you move around, making you feel like you are in the virtual location instead of your real setting. The experiences range from a basic 360-degree view of a town square to interactive games, which require higher-end headsets that plug into desktop computers. You can view completely computer-simulated worlds or exotic existing places.

Kacey Hadick (Anthropology and Geography, ’13), Heritage and Conservation Program manager at CyArk, uses the technology to digitally take people to at-risk cultural sites around the world. Over the past few years, he traveled to Mexico, Greece and Lebanon to capture data. Submillimeter laser scans provide the data needed to create a 3-D model, and photos are used to make realistic textures. Using mainstream virtual reality equipment, Hadick and his team can bring digital replicas of ancient sites anywhere. “We took some of our experiences to a monastery in Bagan, Myanmar,” he said. “The young boys were novice monks, and they were thrilled to put on the VR headset and ‘travel’ to Greece.”

Hadick is also on a team that brings VR to schools. “It is a way to bring history to life and allow kids to travel and connect with a place that they might not get to visit in person,” he said. “Hearing a young person’s amazement when [he or she puts] on the glasses is really rewarding, and it’s fun to answer the questions and see the curiosity that is generated.”

Virtual reality is also creeping into journalism. This year, Cal Poly student journalists have been recording campus events with a special high- definition digital camera that produces 360-degree photos or up to 25 minutes of continuous 360-degree video. The camera is small enough to fit in a pocket, which is ideal for journalists who require portability.

“It allows viewers to experience what it feels like to be in a space that’s best described visually,” said Gurpreet Bhoot, journalism senior and managing editor for multimedia and web for Mustang News. Bhoot recently attended a protest and sent a 360-degree image back to the newsroom by connecting the camera to her smartphone. She thinks 360-degree views of events could revive journalists’ reputation for providing full and accurate information. “If nothing else, it could make receiving the news more exciting,” she added. The learning experience has been valuable for Bhoot. “I hope that experimenting with the 360-degree camera demonstrates to future employers that I’m willing to take on a new technology and that I know how to problem solve in high-stakes situations.”

Students in the Liberal Arts and Engineering Studies (LAES) Program have found numerous uses for virtual reality technology. In 2015, one group partnered with architecture students on a proposal to redesign a tunnel space in Sacramento. Instead of creating a miniature model or 2-D renderings, they built a 360-degree experience so city representatives would feel like they were walking through the tunnel. Another student used virtual reality to make a music rehearsal simulation, and one composed 360-degree videos for an internship with the Disney ABC Television Group last fall. Program Director David Gillette teaches a class in which students critique the story- telling elements of 360-degree video games. But LAES students aren’t just using the technology; they are working on ways to improve the experience.

Transitioning from one scene to the next in cinematic VR remains a challenge, as traditional 2-D video transitions can be jarring inside a headset.

“While in 360-degree video, a simple ‘wipe’ transition or cutting between images too quickly can make the viewer almost ill because it’s so disorienting,” said Gillette. “We’re experimenting with different kinds of cuts and transitions to see what works best and what’s awful. We hope to come up with something that no one has thought of before.” Some students are also working to improve the sound and touch in the immersive experiences.

The entertainment and gaming industries were the first to embrace virtual reality, but the technology is poised to impact several more aspects of everyday life. We don’t know exactly where virtual reality will lead, but it’s clear that Cal Poly students and alumni will be right there at the forefront of development.